Indian culture finds elephants as the animals that bring happiness and prosperity. And mandala shows the way to discover the answers to many questions. Their images appear on many occasions. Nowadays, they are used not only by monks and people associated with the sacred sphere, but also by ordinary people.

Elephants are the epitome of mental and physical strength as well as robustness, power, prosperity and wisdom. The energy of the elephant helps regain self-confidence and develops patience. According to Hindu mythology, the elephant appeared during the creation of the world. The white, three-headed elephant, called Airavata, was the mount of the god Indra.
Indian often use these strong animals for physical work in the forest. They also help with weddings by bringing the groom. People decorate them beautifully for that occasion. Elephants often inhabit temples in India. One of the temples created a unique palace for elephants, Punnatthur Kott, putting over 60 animals in there. During the solemn celebration of religious holidays, at least one of the elephants is richly and colorfully decorated and carries statues of Hindu gods on their backs. 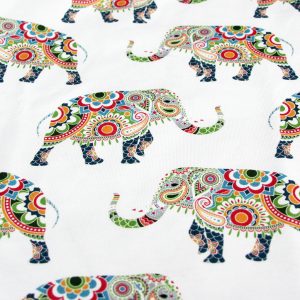 In Sanskrit, the word “mandala” means “circle”, which gives it a good overall picture. Although a square also often appears, mandala is a symbolic diagram based on a circle, very helpful in meditating and creating a spiritual connection with the cosmos. When finished, it becomes a representation of the universe, a place where all gods and universal forces gather. This sacred element of Tibetan Buddhism is usually created with colored sand. You can also find mandalas carved in bronze or stone, as three-dimensional figures.

The combination of an elephant and mandala means the desire to start life off positively. At Folky, we believe that children don’t have any negative feelings in them until they learn them. That is why we would like our elephants to keep the little ones in a trap of happiness as long as they can.
Check what we can offer -> here.