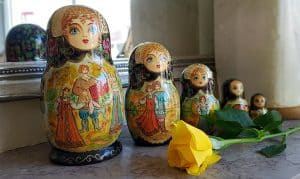 When you think of Russia, what is the first thought that appears in your mind? What souvenir would you bring home? A wooden doll, perhaps? It is possible that you’ve never heard of the name “matryoshka” before. But you have seen the figure it is referring to, at least on the photo, and you can link it to Russia perfectly.

The history of the Russian doll is not as old as anyone would think, little over 100 years old, but rose to fame as the symbol of Russian folklore.

The word “matryoshka” comes from the name Matryona, a  popular name back in the day. It means “respectable lady”, “mother of the family” or simply “mummy”. This is the reason why the beautiful nesting doll became an embodiment of woman’s health and fertility, a symbol of a family.

A surprising fact from Russia

The catch is, this cheeky-looking doll might not have its origins in Russia at all. One of its most recognizable symbol might come from… Japan! There is a version of a matryoshka’s history that in 1890 japanese Fukurama (one of the japanese gods of happiness) doll was brought from Asia. Then, it became an inspiration for an artist who created wooden statue of young lady in traditional clothing. Afterwards, he created its 7 replicas, all of them hand-painted. Each smaller than previous one and put inside each other – and that’s how Russian nesting doll was born. Moreover, first matryoshka contained females and males alternately.

Nowadays, matryoshka’s image is stretched in all directions. It is not only a girl, but also any famous figure you can think of. Russian souvenir shops showcase a wide range of wooden nesting dolls that feature Putin or Lenin, animals, fantasy characters and many more. The popular toy became an inspiration for many artists and designers. Amongst them Folky, who decided to include this character of Russia in their first Spring/Summer 2019 collection. Be sure to check it out 🙂 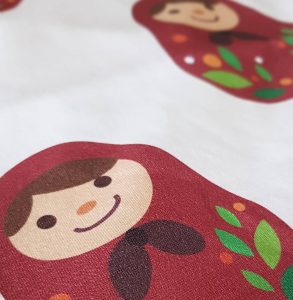 I am on Maternity Leave. The custom orders are now closed. You can still order ready-to-ship products. Thank you! Dismiss