A teardrop, a kidney, a mango, an almond, a slipper, a drop. Paisley has a lot of names and also a lot of history.

The textile’s real name is “buta” but more commonly known as “paisley”. How did it happen? The name Paisley finds its roots in Scotland. The town of Paisley was the capital of Britain’s textile industry. They were producing cashmere shawls with the paisley pattern. The beautiful print first found its way to Scotland from Persia in the 18th century when the East India Company brought new designs to Europe.

The Coats brothers were the owners of the biggest factory of cashmere fabrics with drop-shaped designs. They managed to export their products and craving for them on neighbouring countries. From there it spread further easily. Especially when one of the scarfs belonged to Marie Antoinette of France. The Brothers received the noble titles for their products from queen Victoria.
The paisley trend in fashion has never faded. The design started appearing not only on cashmere shawls, but also other clothing, furniture and wallpapers. During the ’60s it got very popular amongst hippies and bohemians after ‘the Beatles’ started wearing it.

Possibly, the almond-shaped design became so popular because of its symbolism. “Buta” is a representation of floral sprays combined with cypress tree – a Zoroastrian token of life and eternity. This shape is also the image of fertility. The connection with Hinduism and Yin-Yang symbol can also be noticed.
This design was also used as a protecting, lucky charm. We would like your kids to have the happiest childhood possible. That is why we would like to introduce to you our Folky products with almond-shaped design. Let them be a lucky charm for your precious babies. Grab yours -> here. 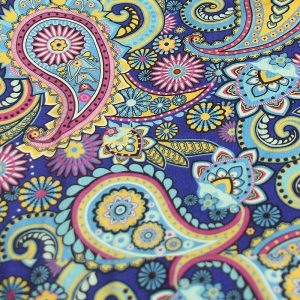