The Polish Rooster: a magical bird

Polish folklore is full of symbolism such as beautiful flowers and images of animals. The Poles believed in harmony, and used symbolic prints to express it. Amongst them, the rooster, a magical bird known for its rather macho behaviour.

There are some reasons why a cockerel is one of the symbols of the Polish folklore. The bird always guards all of its partners and its territory. Character treats such as high potency and vitality often result in large offspring. Its image was carried in wedding processions. Being sensitive to daylight makes him an early riser, and we rise with him. His irregular crowing is distinct and heard throughout many villages in Poland. The personification of sunrise, dusk, vigilance and time, resurrection, victory and bravery. Young girls often led processions holding wreaths with roosters during harvest festivals, so they can be blessed with fertility. When the bird was crowing, people suspected good harvest or the arrival of guests.

One could find it outdoors but also indoors. Wandering through a village one could spot the rooster on walls and inside people’s houses it would feature he would be depicted on plates and bowls. The image of the rooster was used as decoration on houses and chapels. Most importantly, the rooster featured on top of a church as a weather vanes, to remind people about morning prayers. You can also find him in Polish proverbs: a person with always changing views is regarded to ”turn like a cock in the wind”.
In tune with the Polish spirit, Folky has put this beautiful bird on its fabrics to bless your baby’s new journey in life. 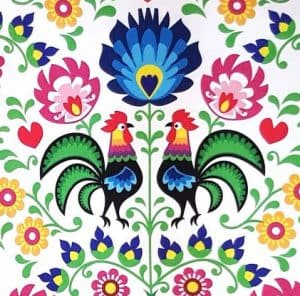 2 thoughts on “The Polish Rooster: a magical bird”