Tiger – a king and a guide

The tiger is one of the largest cats in the world. He lives mainly in Asia, in forests and jungles, which is why he gained such a meaning in Asian folklore. And mostly there it is  considered to be the king of animals.

The symbolism of the tiger is quite widespread. It is not only the epitome of power, beauty and wildness but also power. The tiger is a yang animal whose courage helps ward off evil demons. This cat sees well at night, which is why he is considered the one who brings light (internal). It is a symbol of speed and energy, as well as determination and beauty. And protection, too. According to shamans, the tiger is also the epitome of healing and removing toxins from the environment.

The tiger has many meanings

This animal knows how to turn negative emotions and energies into something good. And when you need rest and regeneration, it will take care of it, being at your side. It is also a symbol of hospitality and devotion. In Japanese culture, the tiger is one of four good spirits.
This big cat appeared even in Chinese mythology. According to one of the Chinese myths, the entire balance of the cosmos and its power rests on the shoulders of five tigers. They protect the universe from falling into chaos and falling apart.

A guide of life

According to Buddhists, the tiger is a guide, a teacher in the jungle of life. If his symbol appears in our lives, he will lead us through them and protect us. It will help set boundaries and goals. It helps to build your own personal strength. Help your child (and yourself!) Take the right direction in life and find freedom and fulfillment. Maybe just try to bring the tigers that are lurking on Folky products into your life 🙂 Check what we offer by clicking on the image below. 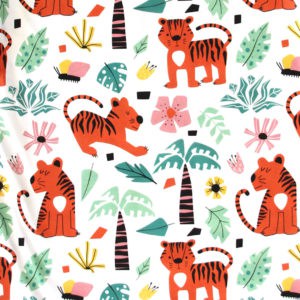